Roberto Kusterle was born in Gorizia in 1948, where he still lives and works.
He began with painting and installation in the 1970’s, before identifying photography as the ideal means for his artistic expression.
During the following years the principal themes of his poetics emerged: a continuity between the human, animal and vegetable world, the mediating role of the body, the negation of the gaze, the constant practice of irony, ambiguity and displacement to shape an idea and to make the viewer wonder.
Photography is used to maintain the tension between fiction and reality. Kusterle has a very personal approach to the camera: the actual taking of the picture is only the last step in a complex and articulated creative process.
During the 1990’s Kusterle brought together the search for the formal equilibrium of the image with the use of photosensitive emulsions, resins, glass and natural elements to create three dimensional installations and photographic objects.
In 2003 Kusterle exhibited the cycle of works Rites of the Body at the Galleria Regionale d’Arte Contemporanea Luigi Spazzapan in Gradisca d’Isonzo (Gorizia). In these works the link between man and the animal world is celebrated through the mimetic exchange and borrowing of eyes, heads and hair.
The bodies are covered in clay and imprints, they reproduce the pattern of animal coats or alphanumeric characters, exploring a familiar, yet undecipherable, linguistic dimension.
This was followed by αναχρονος (Anakronos), made between 2004 and 2006. This work broadened the range of his subjects, revealing the worlds from whence they come or that they shape, each according to their own logic.
Kusterle began creating and producing experimental short films in collaboration with the filmmaker Ferruccio Goia. These are independent projects, which add a temporal depth and a process based aspect to the themes and atmospheres explored in photography (Homage St. Elizabeti Turingijski, Looking in the Eyes, Dancing Water in 2008 and Stabat Mater, 2009), question the relationship between human work and the industrial landscape (The Last Night, 2009) or identify rituals, pauses and codes in reality itself, such as in the documentary Flower Sunday (2008).
Meadows, ponds and dry river beds in the Gorizian landscape become phantasmagorical and surreal theatres. A Silent Mutation was Kusterle’s first exhibition in the United States. First held in 2009 at the Wook & Lattuada Gallery in New York, this was shown again in 2011 at the Garden of the Zodiac Gallery in Omaha as part of a solo show. This marks a return to studio photography, a close and intimate atmosphere which permits a silent dialogue between female figures and vegetable elements. They are metaphysical portraits interspersed with towering flowers, which are in turn made up of a myriad of corollas, fruits and leaves.
The complex work of planning, research and creation of the costumes, scenery and photographic sets, which underpin all of Kusterle’s work, were given new energy with the adoption of digital techniques and graphic manipulation. The first example of this was the series Mutabiles Nymphae exhibited at the Mestna Galerija in Nova Gorica (Slovenia) in 2010. Here the sea envelops the bodies and garments of timeless nymphs with gentleness and elegance.
Changing perspective, Kusterle followed this with the cycle Stone Marks (2011), first shown in Spilimbergo (Pordenone) and then at the Antonio Nardone gallery in Brussels in 2013. As well as his familiar use of clay to seal the relationship of the human body with the earth, the artist added the reproduction of cracks and crevices to the skin, a sculptural fusion of the characters with the rocky element creating new archaeological artefacts. This research continued in the series The Structure of Appearances (2012), where the human figure is exposed and apparently left alone.
There are no animal or vegetable elements to complete it: stone is once again a pedestal. The poses, far removed from classicism, give an absolute and mysterious power to the body in its marble-like appearance.
In the works The Marks of Metembiosis (2012-13) we once again see a dreamlike and grotesque vitality. The camera reveals the joints and supporting structures which maintain the equilibrium of the protagonists, in a metamorphic and symbiotic relationship between man and the animal and vegetable world, according to the formula created by Giuseppe O. Longo.
The series Abysses and Low Tides is Kusterle’s most recent work, which shows us bodies filled with reflections, mineral encrustations,
algae and embraces, in a harmony brought about through a long time below the waves. The framing invites us to plunge into the dream in order to go beyond the borders of the image: the bodies re-emerge transformed, preserved and nourished by the sea, as if they had returned form a long voyage. 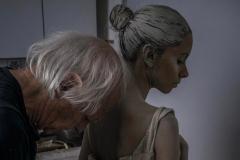 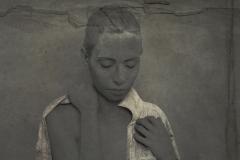 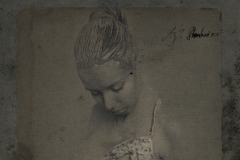 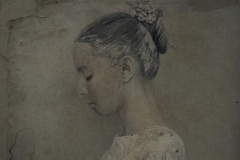 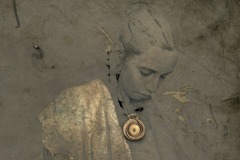 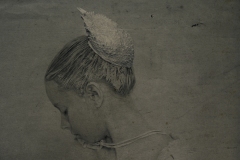 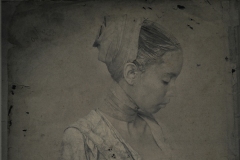 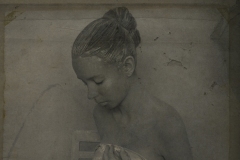